The Origin of Dog Training

Jan 5, 2022 | Mark Villanueva
Share on Facebook
Dog training used to be cruel, a system that thrived on punishment, threats, and the use of hurtful equipment. Although we’ve come a long way since this cruel practice, sad to say, some dog trainers still follow this old method. Most of us, however, have moved on to more humane techniques. Trainers are now gearing towards a positive, friendly means; a reward-based teaching strategy. Let us glance back to how dog training had developed over the past few years, especially how we’ve become wiser and more patient in handling our dogs. 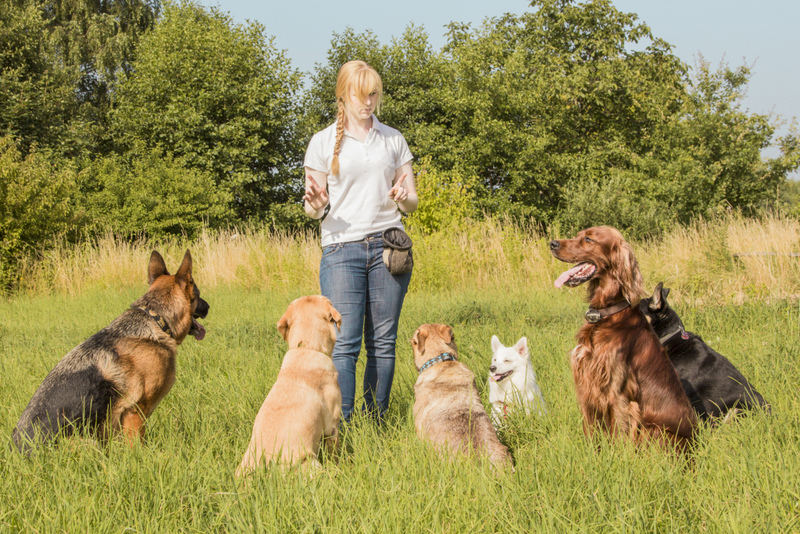 The birth of animal psychology

One of the earliest recorded studies on animal psychology began with the narrative of how an unusual horse named Clever Hans, true to his name, appeared to dexterously solve mathematical problems. He was so clever that stories quickly swirled around him, building up fame during the turn of the twentieth century; attracting the attention of Oskar Pfungst who, at the time, was studying in the Psychological Institute of Berlin. After spending some time studying the talented Clever, he concluded that the horse was certainly skillful, but that it didn’t actually know how to count. Pfungst explained that the animal was merely taking inadvertent cues from its trainer to show that it had “answered” mathematical problems. Suffice to say, Clever Hans didn’t turn out a math wizard, but it signaled the need for methods that are based on experience, and verifiable observation when it comes to animal behavior studies.

A scientist named Ivan Pavlov, just about this period was also conducting an investigation on a dog’s digestive system. He had observed how his dogs salivated whenever he came up to feed them. He experimented by making a sound right before presenting them with food. After some time, he noticed how the canines would salivate whenever they heard the sound, which they had linked to the arrival of their food; this, even if the food wasn’t actually given to them. They became as excited by the assumption of a meal just as the meal itself. Their ability to associate these two things is called “classic conditioning,” and this is what our current knowledge regarding animal psychology is generally founded on.

Edward Lee Thorndike was one of the pioneers in the application of a scientific approach to educating canines through motivation. He also used a statistical approach and positive reinforcement. He noticed that if a behavior caused a favored effect, there’s a high chance of it being repeated. Conversely, behavior that caused a negative effect isn’t likely to be done again. He called this clever discovery the “Law of Effect.” Studying how this system worked to influence a dog’s behavior became the focal point of understanding why a dog becomes encouraged to behave in a certain way or otherwise. It’s become key to effective training.

American psychologist Burrhus Frederic Skinner is a popular figure in the area of behaviorism. He invented a mechanism for studying animal behavior, which is now known as the Skinner Box. The device consisted of a lever, a niche for rewards (food), and a container filled with water. An animal would be placed inside it where, being idle, it would decide to investigate on the little lever. When it does, food would directly fall down the tray. After some repetitions, the dog would eventually learn that tapping the lever would lead to a reward; hence, the birth of “operant conditioning.”

Skinner’s studies came up with a better structure on how the principles of learning worked compared to Thorndike’s “Law of Effect.” This contributed so much in terms of how we train dogs today. It’s due to his work that we understand how desired behaviors must be bolstered and reinforced; that how a dog behaves can be guided through small, gradual steps; and that they react positively, causing better learning, to immediate reinforcement rather than when delayed.

Dog training during the World Wars

During WWI and WWII, the demand to train dogs for military use was understandably high and urgent. The situation at the time had prompted the “Revolution of Compulsion,” and it wasn’t an ideal scenario for the start of dog training profession. Canines were trained based on rigid punitive techniques. Credited with this program was Konrad Most, who was also a major contributor to the development of the Society for Animal Psychology, and the German Canine Research Society. He also published his book called Training Dogs: A Manual in 1910, which promoted his punitory methods.

Most’s principles of training were heeded by the military which, in turn, adopted them and spread it down the ranks. The United States government added credibility to Most’s techniques this way and it was only a matter of time before the general public was convinced by its efficacy and used the same callous methods with their own pet dogs. This training process has turned out resilient, and even to this day, some dog trainers refuse to depart from it.

The rise of force-free, reward-based training

After the great World Wars, there had been a shift in training style to more amicable methods, thanks to Marian and Keller Brand, who were former students of B.F. Skinner. Their work had given way to harmless techniques, and soon other countries started to copy them too.

The Animal Behavior Enterprises was established by the Brelands in 1947. Its aim was to consolidate the various fields concerning animal training as well as modern behavior studies. They endeavored to teach people how to train animals in a friendly, humane manner. Utilizing the principles involved in operant conditioning, they taught numerous animals for a motley of reasons. The field of dog training had shifted to a then brand new process that focused on kindness instead of compulsion.

After Keller Breland died, his wife Marian met Bob Bailey, who worked with the Navy’s Marine Mammal Program as its pioneering director. They soon married and worked in cooperation with Canine Companions for Independence, which taught canines to support people with disabilities. The couple’s contribution to the program of positive reinforcement dog training cannot be emphasized enough. 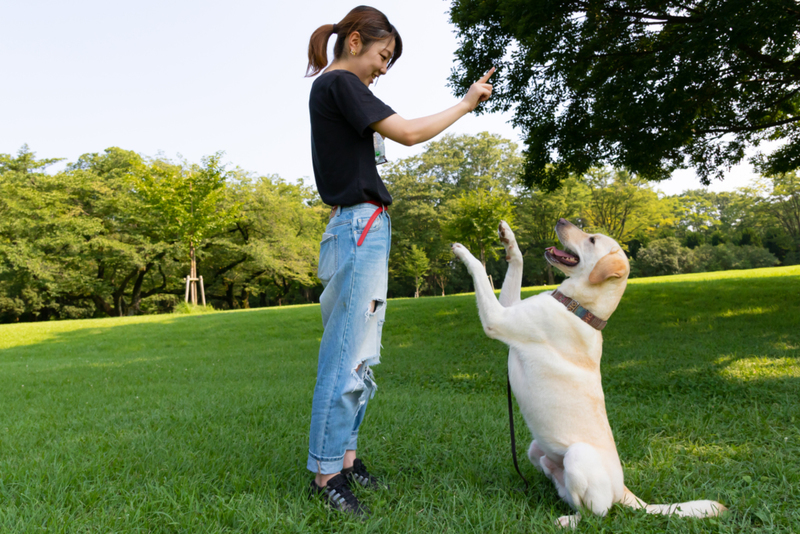 There had been many dog trainers over the years, from the fifties to the seventies, but the book Don’t Shoot the Dog authored by Karen Pryor in 1984 became a pivotal point for the current reward-based methods. She’s credited for presenting clicker training to the average dog training community. It promoted strategies that can be described as force-free, amiable, science-backed training methods; promoting it to a higher plane worldwide.

One cannot fully document the evolution of reward-based dog training without acknowledging Dr. Ian Dunbar, the animal behaviorist/veterinarian who founded the Association of Pet Dog Trainers in 1993, as well as the San Francisco SPCA’s Animal Behavior Department. He is the author of many books and he is credited for introducing the world’s first off-leash training for puppies. For more than three decades he has made over a thousand seminars worldwide, designed to foster puppy socialization and humane dog training methods.

Terry Ryan is also an outstanding dog trainer whose career began in 1968. As program director for the Dean of the College of Veterinary Medicine at the Washington State University, she headed the study on the human and animal bond and the installation of programs that involved animal-assisted therapy. Ryan was a pioneer member of the Delta Society, which is now known as the Pet Partners. According to legacycanine.com “Terry wrote some of Delta’s early training literature and was one of the first Delta Pet Partners animal evaluators. She presented several times at The International Association of Human-Animal Interaction Organization’s Symposiums.”

Together with Marian and Bob Bailey, she traveled around the world with the aims of promoting positive reinforcement training, to assist a multitude of dog trainers by showing them how operant conditioning can be more effective to dog behavior.

We’ve seen the number of popular positive trainers grow with the advent of the 21st century, and their presence has buttressed the movement towards a more humane, reward-based discipline. Thanks to all those who’ve committed themselves to it, our antiquated ways of teaching the family dog have drastically changed for the better. Gone are the days when people resorted to kicking, shocking, pinning, jerking, and hitting dogs. Now we’re slowly but surely going the more compassionate way of training. As a consequence, we’re seeing healthier, happier, and more in-depth trained dogs.

The 21st century — solidifying the foundation of humane training

Aside from all the names we’ve mentioned here, of those who’ve contributed so much to the growth of the movement for a more compassionate, positive-reinforcement dog training, there are other dog trainers who’ve helped solidify its foundation.

Quick facts about the evolution of dog training

Dogs have long been associated as man’s best friend, for centuries, in fact, but you’d be hard-pressed to find documents or any record about proper dog training before the 1800s. Based on our own records, we can conclude that it wasn’t until the late twentieth century that positive-reinforcement dog training came up. Before this period, a dog’s loyalty and discipline had to be tested by man’s tendency to become physical, choosing the stick (over the carrot), when trying to inculcate something on them.

Over the years, we’ve become enlightened in terms of understanding dog behavior, and this has allowed us to adjust to it, subsequently making us more considerate and patient. Today’s approach to dog training, of positive-reinforcement, may be scientifically-backed, yet at its very core, it’s driven by the basic principles of humanity.