A Short Recap of the American Revolution

May 11, 2022 | Paul Abhishek
Share on Facebook
As your history teacher has probably told you, the American Revolution was a philosophical and political event that occurred in North America between 1765 and 1783. But history class was a long time ago, so here is a little recap to refresh your memory. 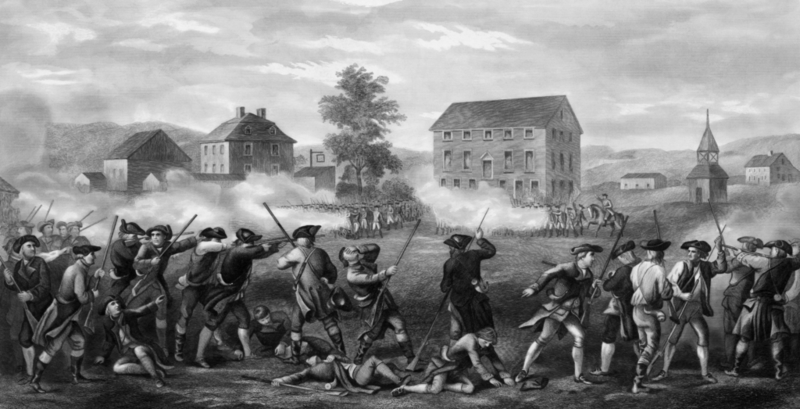 Alamy Stock Photo
The Americans in the Thirteen Colonies defeated the British in the American Revolutionary War (1775–1783), acquiring freedom from the British Crown and establishing the United States of America, the main present-day protected liberal democracy.

The Independence War (1775-1783) was fought in novel ways on multiple fronts; small-scale collisions with light infantry and militia were usually as important as fixed battles. The forces varied in nationality: the United States shaped the Continental Army whilst the UK depended on German mercenaries and the British and Irish armies.

Following early American triumphs at Lexington Green (in April 1775, pictured above), Concord, and in the Battle of Bunker’s Hill, the British cleared Boston. The revolutionaries neglected to overcome the British powers in Canada, and in mid-1776, the British General Howe showed up with 30,000 men, effectively retaking New York. Washington was able to achieve a triumph at Trenton on Boxing Day 1776. However, the British at that point took Philadelphia. Other British powers moved from Canada towards New York trying to encompass New England.

This parade, though, suffered a disaster. In October 1777, under the command of Major General John Burgoyne, 5,700 British, German, and Royalist troops surrendered in Saratoga, New York.
The remaining British troops withdrew from Philadelphia to New York and concentrated their battles in the south, occupying Charleston in 1780. The British subsequently won more victories, but in 1781, the Americans received military and financial aid from France. Crucially, the French fleet defended the Chesapeake Bay from British reinforcements, while the British army under the command of Lieutenant General Cornwallis surrendered in Yorktown (in October 1781), crushing the British. After hearing the news of the defeat, the Parliament voted to end the war.