An Ancient Eight-Mile Long Mural Was Discovered in the Amazon

Oct 10, 2021 | Ofek Hagag
Share on Facebook
Cave paintings are one of the most intriguing ways through which we can learn about how people used to live in ancient times. A recently discovered cave painting was found in the Colombian Amazon, and it’s mindblowing in more ways than one. 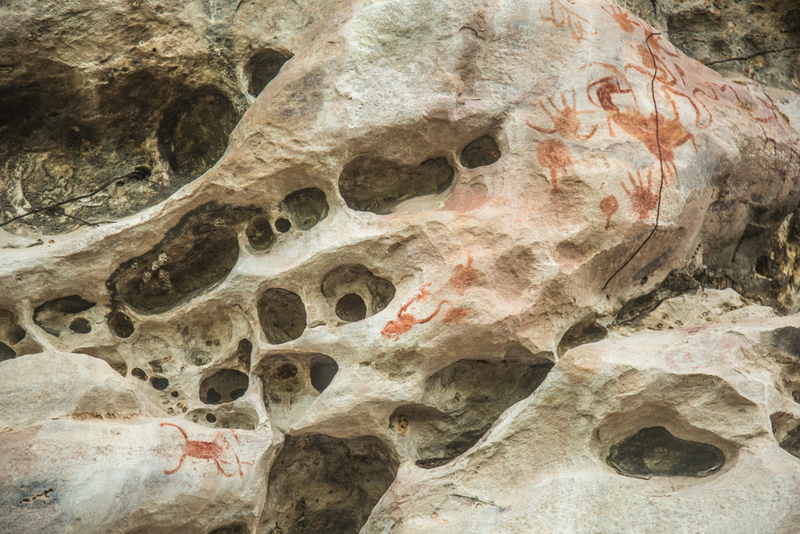 Shutterstock
Well, calling it a “painting” may be an understatement. It’s more of a mural made up of tens of thousands of smaller cave paintings. A team of scientists discovered this unbelievable mural on a rock wall that stretches across eight miles. The paintings were found in such great condition that the discovery is nicknamed the “Sistine Chapel of the Ancients”.

Before going public with the discovery, the site and paintings were kept secret. They were used as a documentary film set and the archaeologists were able to study the place in peace, without tourists or media hovering over. The paintings date back 12.5 thousand years and are a lot more detailed than you’d expect. They feature images of the huge animals that used to roam the area during the Ice Age, like giant ground sloths, mastodons, and horses. The paintings also depict smaller birds, reptiles, fish, and mammals, as well as local flora and masked figures dancing.

The scientists’ theory is that the painters of the discovery were Paleolithic hunters. In ancient times they found their way to the place from Siberia via the Bering land bridge. The leader of the research team, archaeologist Jose Iriarte from Exeter University reports that some of the images were detailed down to a level of drawing of individual hairs on horses’ tails!

Another incredible thing about the paintings is the fact that some of them were painted in places that seem inaccessible to humans, like high-up rocks. Some were positioned so far up that the scientists were only able to discover them using camera drones. The mystery of how those millennia-old humans managed to scale up these walls and paint remains unknown for now.

The History of Dogs As Pets
Dogs became man's best friend through a gradual process of drawing closer.

There Is an Ancient City Buried Under Lake Titicaca
After learning about the possible existence of a temple in the area, Belgian archaeologist Christophe Delaere went digging.