May 3, 2022 | Michelle Muller
Share on Facebook
The Montgomery bus boycott is one of the earliest civil rights protests in American history. It’s also the event that helped make Rosa Parks and Martin Luther King Jr. household names when frustrated with how Black Americans were being treated; they worked on organizing and carrying out the boycott, which lasted over a year. 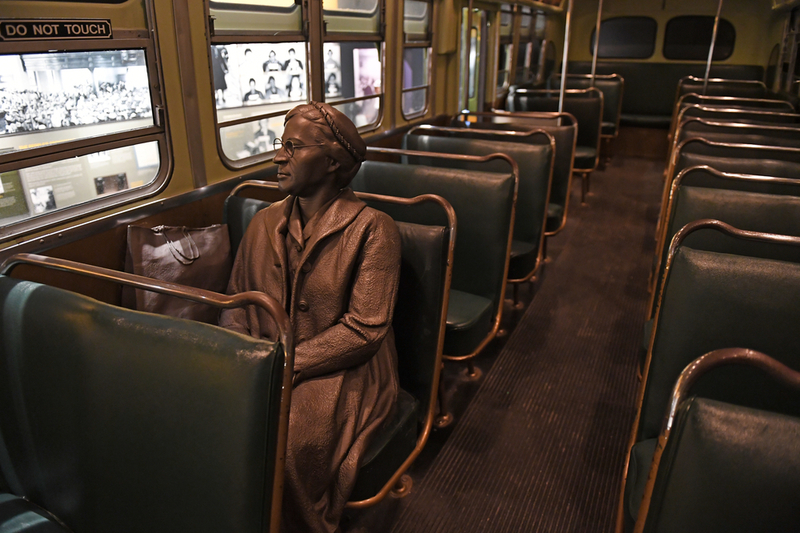 Shutterstock
On December 1, 1955, a weary Parks refused to give up her seat on the bus to a white rider, an act that led to her arrest. Her trial began just four days later, on December 5, 1955, which marked the beginning of the 381-day boycott that led to public transportation desegregation in Montgomery, Alabama.

Rosa Parks has been depicted as someone who first stood up against systematic segregation on December 1, 1955. Quite the contrary. Rosa was not a stranger to activism and civil rights; she and her husband Raymond were engaged in the local and state chapters of the National Association for the Advancement of Colored People (NAACP). Rosa had served as secretary of both branches. “She was an assertive woman who stood up against racism, though in her own quiet way,” Dr. Dorothy Autrey, former chair of the history department at Alabama State University, said. She went on to receive the Congressional Gold Medal in 1999.

Rosa Parks was first arrested on December 1, 1955, for violating bus segregation laws. But, this wasn’t her most photographed arrest. Her memorable mugshot and those photos of her being fingerprinted are actually from her second arrest, two months later, in February 1956. Local police issued warrants for Parks’s arrest and 88 other boycott leaders for organizing to cause the bus company financial harm. According to Burkhardt, the protests had a powerful financial impact. The organizers were dressed in their Sunday best and took a photo in front of Martin Luther King Jr.’s Baptist Church in Dexter Avenue, then turned themselves in.

Nine months prior to Rosa Park’s arrest, a 15-year-old named Claudette Colvin was arrested when she refused to surrender her seat to a white woman on the bus. Civil rights organizers didn’t regard Colvin as a movement figurehead at first, but they later revisited her case, and she became one of five plaintiffs in Browder v. Gayle. This federal court case ultimately overturned segregation laws on Montgomery buses and ended the boycott on December 20, 1956. Parks wasn’t one of the plaintiffs, but several other local women were, including Aurelia S. Browder, Susie McDonald, and Mary Louise Smith.

Parks Had A Run-In Before With the Bus Driver

In 1943, Parks got onto a bus that James F. Blake was driving and paid her fare at the front. She began walking down the bus’s aisle to make her way to the Black seating section at the back, instead of exiting the bus and re-entering through a different door as was required at that time. James F. Blake forced her off the bus and pulled away before Rosa could re-board. Blake was also driving the bus Parks boarded on December 1 when she refused to give up her seat.

Stacy Allison: the First American Woman to Climb Mount Everest
Climbing Mount Everest is extremely difficult, but in September of 1988, Allison finally did it.