Apr 25, 2022 | Paul Abhishek
Share on Facebook
The Taj Mahal is probably the most famous landmark in India. This beautiful tomb was built by Shah Jahan, the Mughal Emperor, in memory of his wife Mumtaz Mahal in the year 1631. Apart from being a masterpiece, this monument has become an icon of love throughout the world. Read on to learn four unknown facts about the Taj Mahal. 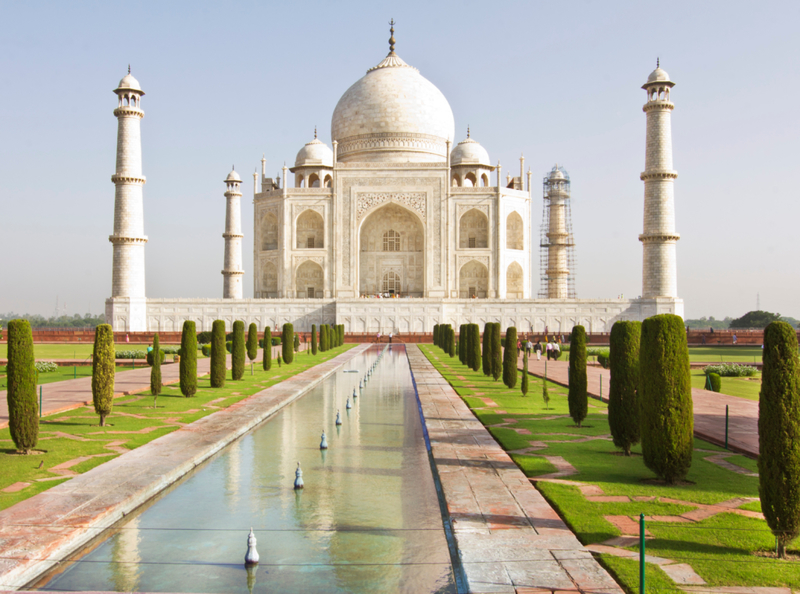 The Taj Mahal in Black

Emperor Shah Jahan wanted to build a black replica of the Taj Mahal opposite the original Taj Mahal on the bank of the river Yamuna. His wish, however, was never fulfilled as he was overthrown by his son Aurangzeb. A European traveler named Baptiste Tavernier mentioned this in his writing back in 1665. Shah Jahan wanted to be buried in the black Taj Mahal opposite to the white Taj Mahal that he has dedicated to his beloved wife. Unfortunately, his dreams never came true.

The British Viceroy of India, Lord Curzon, loved the Taj Mahal and was shocked to see a small lamp hanging over the mausoleums of Mumtaz Mahal and Shah Jahan which did not emit sufficient light to see these beautiful mausoleums. In 1904, he commissioned two Egyptian artists and a scholar named Todros Badir to come up with a unique lamp that will suit the Taj Mahal’s glory. They took two years to come up with a bronze lamp and in 1906, Lord Curzon presented it to the Taj Mahal which can still be seen. His name is inscribed on the lamp in Persian.

There is a myth that Shah Jahan didn’t want the artists to build another Taj Mahal so he decided to cut off their arms. To date, there is no evidence to prove that, and it’s just a story. Shah Jahan considered the Taj Mahal as an edifice of love so it is unlikely for him to have done such a thing.

The Pillars of the Taj Mahal are tilted

If observed closely, one can see that the four pillars surrounding the Taj Mahal are tilted outwards. It is not a construction error but done intentionally to protect the main tomb in case of a natural calamity like an earthquake where the pillars will fall outwards instead of falling inside and destroying the tomb.