The History of America’s Greatest Shoe: The Converse All Star

Apr 19, 2021 | Zoe Karbe
Share on Facebook
Designed in 1917, the timeless Converse All-Star or Chuck Taylors as they are nicknamed, have played a major role in modern pop culture. Curious as to how this simple shoe has been so influential? Here’s the story behind the iconic sneakers.

Charles “Chuck” Taylor was an American basketball player and shoe salesman. A few years after the release of the Converse, Taylor inspired the redesign of the brand’s shoe, inevitably leading to the nickname “Chuck Taylors.” The shoe company even added his signature on the side of the shoe as a reference to his influence. Still, however, during this time Converse All Star was mainly a basketball shoe, and Taylor canvassed across the United States in a bid to sell the shoe to various basketball teams around the country. Eventually, after being the official basketball shoe for the Olympic Games and part of the work-out gear for U.S troops during WWII, Chuck Taylors became the main choice of shoe for most athletic events.

Towards the end of the 1960s, Converse had pretty much of a monopoly on the market. Their entrance into the casual sneaker market cemented that. The shoe was no longer for the athletic elite, but now, a shoe for the people. At first only available in classic black and white, the company soon released a range of colors, designs, textures, and even special editions.

You can’t remain on top forever. During the 1970s, Converse All Star began losing their grip when competing shoe companies offered better quality and stronger arch support. Though athletes dropped the once-popular shoe, very soon it was young artists and musicians who rebranded the iconic Chuck Taylors, making it the symbol of the underdog. 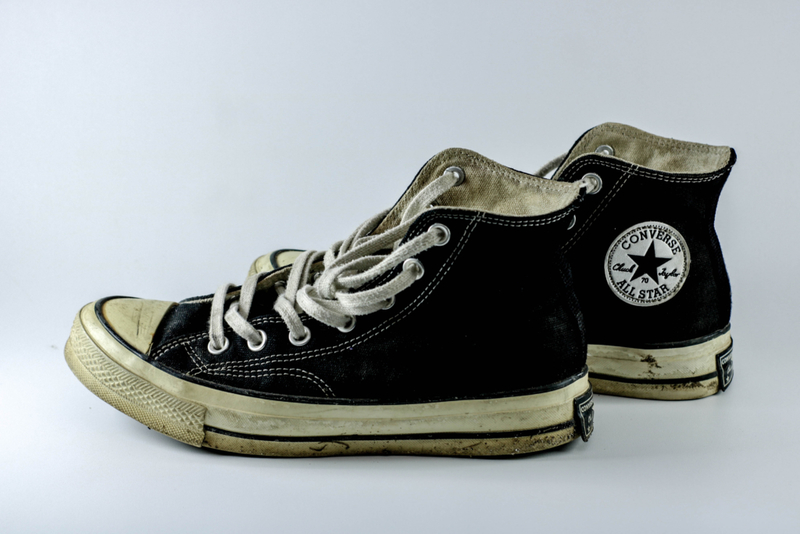 In the iconic film “Rocky” the main character Rocky Balboa wore Chucks. The Ramones wore them because they were cheap. Even Elvis, Michael Meyers, and Michael. J. Fox all wore the shoe in their movies, making the sneaker the go-to shoe for the rebellious youth of the grunge era.

While the shoe maintained it’s cultural status, the business was not doing well and had to claim bankruptcy several times. Then everything changed. Nike bought the company for a whopping $305 million and completely revamped the business by moving the factories overseas. Production costs plummeted and profits rose once again.

Today the shoe that remains pretty much untouched since the 1900s is still incredibly popular. Historically, Chucks have been in the top ten bestsellers, but in 2017, the Chuck Taylor Low Top shoes were the second best-selling sneaker in the U.S. A massive draw is the affordability of the shoe, but the marketing and branding contribute to its staying power, making it a true cultural icon in fashion.

The Secret Story Behind Some Of The Beatles’ Most Popular Songs
Take a look at the inspiration behind some of the most famous songs in the last few decades.

The Lost History of American River Communities, Revisited by an Artist in a Shantyboat
Wes Modes is documenting life along America’s waterways. American rivers used to be home to thousands of people, particularly during the 19th and early 20th centuries...