The History of Spearfishing

Jun 5, 2021 | Ish Bautista
Share on Facebook
Spearfishing is a sport that’s been around for millennia. Early civilizations were familiar with the custom of spearfishing when they started fishing from streams and rivers using sharpened sticks. Currently, spearfishing utilizes elastic powered spearguns or even slings used to strike fish and capture them. Many people nowadays resort to spearfishing when they go out to sea or even when scuba diving or free diving. It’s considered a modern-day sport that can be combined with almost any underwater sport. The history of spearfishing goes back to over 16,000 years ago in Southern France during the Paleolithic times. Drawings were discovered of seals that were supposedly harpooned using barbed poles and were later likely consumed. 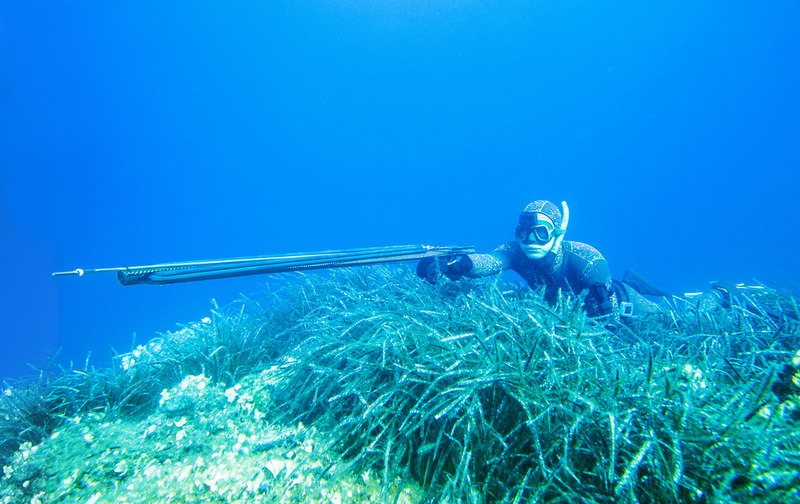 Shutterstock
Greek historian Polybius who lived in 203 BC declared that the purpose of a spear was solely used for catching swordfish in his text called “Histories.” The spears are different from our modern-day ones and were more traditional since they used detachable heads that had to be screwed into their harpoon. A gig is a spear that developed later on and it resembles a trident. The long-handled spear was first featured in the South of America and the Midwest and was used for the act of gigging. Gigging is the act of hunting fish or even frogs with this long-handled trident-like spear.

In the Water or on the Beach

All the past methods of developing spears have paved the way for the 20th-century versions. Shore diving became one of the most popular ways of spearfishing wherein a diver enters an open sea structure like a beach or a lake to catch fish. The diver may use a sling or a speargun to catch fish that swim towards the reef. Boat diving is another method of catching fish where the diver uses his boat to drive further from the shore as opposed to shore diving. This method of catching fish can be the most effective since it’s essentially done in areas where there is a huge fish population. Bluewater hunting is another method of diving wherein spearfishing is done in open waters like oceans or seas. Fish are then baited and when hooking them in, you can use them as bait for other, bigger fish such as marlin, tuna, and even giant trevally. Spearfishing doesn’t have to entail swimming into the depths of the ocean, it can also be done in shallow water or from a boat.

One of the great things about spear-fishing is that it isn’t done in massive quantities and causes less of a harmful impact on the environment. It doesn’t create any habitat damage, or pollution and some people attest to it being one of the most responsible ways of catching fish. Our ancestors knew how to catch fish without harming the environment, and this tradition is still carried on today by many budding divers who visit the sea in search of the perfect catch.

Why Outdoor Winter Exercise is Good for You
The cold winter weather does not only make us feel more sluggish, but it also makes us want to eat more. But don’t let the low temperature stop you from going outdoors and..

Futbolera: A History of Women and Sports in Latin America
"Futbolera" is an ode to women's stories and their experiences of pressure and struggle in the world of sports.