The Lost History of American River Communities, Revisited by an Artist in a Shantyboat

Wes Modes is documenting life along America’s waterways. American rivers used to be home to thousands of people, particularly during the 19th and early 20th centuries. Families lived close to these silvery channels, traded, thrived, as chronicled initially by Harlan Hubbard’s Shantyboat Journal. These communities are mostly gone now, but the mystery of the time remains along these rushing waterways, chiefly unexplored, until Wes Modes comes floating down through the rivers of the US in a shantyboat beginning in the summer of 2014.

A project called “A Secret History of American River People” is the brainchild of this University of California Santa Cruz lecturer. It aims to revisit the forgotten lives of the river people, its system of community, lore, and the living rivers. In six years, Modes had spent his time cruising through rivers: Mississippi, Tennessee, Sacramento, and the Hudson, capturing what he can about the lost river culture, the link between the people and its rivers. In 1990, Wes Modes also embarked on a trip that meandered around America, following its veiny paths “train-hopping,” experiencing the country’s backyards. He reconstructed stories in his mind whenever he glanced at old automobiles, broken fences, worn out homes. It was in this journey that he first heard about the old river communities, of friends embarking on boats they had made, and punk rafting was conceptualized. 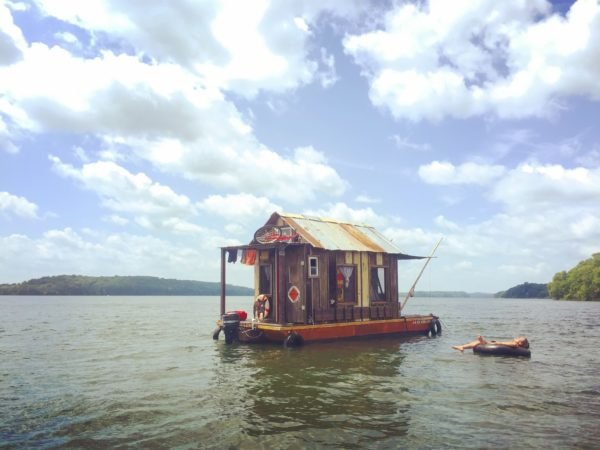 In 2005, Wes Modes and his friends decided to cruise on the Missouri river, sitting on plywood on top of tire tubes. To him it was reminiscent of his childhood dream, carved out of Mark Twain’s novel, Huckleberry Finn, floating down rivers in the beautiful summer. “It seemed like a natural transition from train hopping to river rafting,” Modes said. In 2012, Modes and his buddies set up camp at “Camp Tipsy” and came up with the idea of building a floating cabin that eventually became the blueprint to their shantyboat. Traditional shantyboats were common back in the 19th and 20th century, numbering in the thousands especially along Ohio and the Mississippi rivers.

They were basically made of scrap materials, while those who could afford it bought bigger versions with 2 to 3 rooms, similar to a shotgun house. Determined to relive earlier times, Wes Modes copied the old models for his new shantyboat. He scoured for things he could make use of, scavenged some, and recreated the boat out of spare, discarded materials- from chicken coops to spare lumber and such. He documented this experience and titled it Shantyboat build blog. 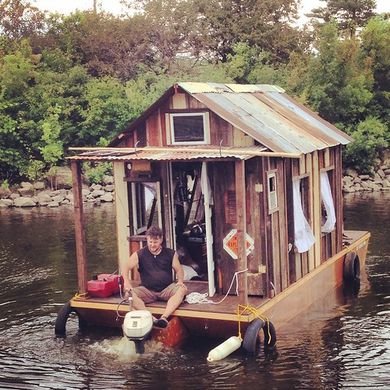 In 2014, Modes got additional inspiration to follow through with his work. “I found that there’s very little written about the social ecology of river communities,” Modes said, and he wanted to document the living and oral history of fluvial communities, and study what made their fates change along the years. The data he’d collected in interviews and surveys were both surprisingly contradictory and complementary. Some families had moved away from the river after being bucked off by the socioeconomic landscape.

While affluent ones had built luxurious homes by the banks, unaware of causing such friction. Back in the day, the communities by the riverside were inhabited by common workers, farmers that had been pushed out of their lands, women and children, trying to subsist during the Great Panic back in 1893. They lived on cottage industries, raised pigs, and sewed. He claims that it was also through these communities that immigrants with no means of living at all, with no money, found temporary work and established themselves over time. It wasn’t a very ideal set up, so to speak, and it was easy for those who lived inland to view these people as wanderers, vagrants, and troublemakers. They were named “River Tramps” in one publication of the Cincinnati Enquirer, entailing their derogatory lifestyle as free loaders, petty thieves. 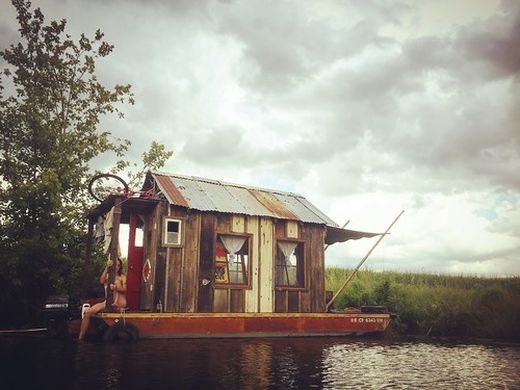 Soon they became unfortunate victims of movements to drive them away from waterfronts. “A lot of the townies were really dead set against shantyboats and squatters,” Modes explains. They were painted in a bad light, and although they did not have ideal lifestyles, and some of them were rum-runners and bootleggers, it’s hard to differentiate the truth from exaggerated portraiture of them. Modes understands that these people lived in complicated times. They were marginalized and he wants to give something back to them by listening to their stories, really hearing them, documenting them for posterity.

To achieve this goal, Modes transforms his shantyboat as a mobile archive, a library to the beauty he sees in their history. He has made many interviews, interactive web docs, so people who are interested may have a reliable way of learning about their cultures and stories long gone. He had installed photographs in his boat, folk art, and artifacts collected during the span of his excursion. Modes was joined by his friend Jeremy Daniels in 2014, as they started their long adventure at the Mississippi River. Asked about his reasons for coming along, Daniels, an engineer and former soldier, said, “I was compelled to know more about the latent substructures that had shaped our nation… I think it’s really important for people to examine their connections and impact with their communities and their environments.” 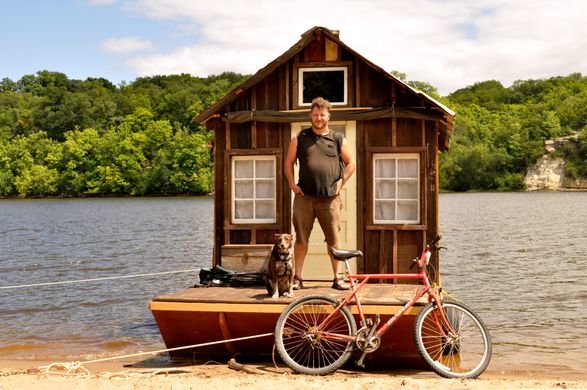 And so they have been solidified by their cause; for 6 years both have traversed rivers and interviewed people who live close to the banks. They listened to their narratives, recorded interactions, numbering 125 overall. From artists, museum coordinators, fishermen, marina proprietors, collected in over 1,200 miles of shanty boating on America’s rivers. After many years of traveling and adventure, Modes’ shantyboat has become a project of living art, frequently visiting history exhibits in pop ups and museums, attracting people who are intrigued by its romance, stories and rich history.

The boat is set to sail again on 2019 down the Ohio River, sailing out from Pittsburgh, Pennsylvania by June. Modes plans to explore the river’s history of shipbuilding during WW1, along with the place’s Native American Heritage. For now, the ship is berthed at the Portland Museum in Kentucky. “I just continue to be fascinated by people’s stories. It provides me artistically with adventure and inspiration,” Wes Modes said. He has no plans of slowing down just yet with his schedule filled up through 2020, and beyond it until he runs out of rivers.

A True Marvel: Get to Know Stan Lee
Spider-Man. Captain America. Iron-Man. You don't have to be a comic book fan to know who those superheroes are. But you probably should know the name of the man who created..

The Pioneers of Women’s Rights
Numerous women in American history fought for the rights that their fellow sisters are enjoying today. If it weren't for their hard work, society wouldn't even recognize equal..