These Forensic Experts Have Brought These Historical Figures Back To Life

Jun 6, 2022 | Zoe Perry
Share on Facebook
It’s been a real pain recreating faces on historical figures. Unfortunately, Nefertiti didn’t walk around taking selfies so we have had to rely on sculptures and paintings for quite some time. Well, things have changed and thanks to some incredible talents artists and impressive CGI technologies, we have never been closer. With the help of these facial reconstruction experts, we can now see just handsome Julius Caesar really was! It also reveals that despite Bach’s beautiful music, he didn’t have a face as lovely as his compositions! 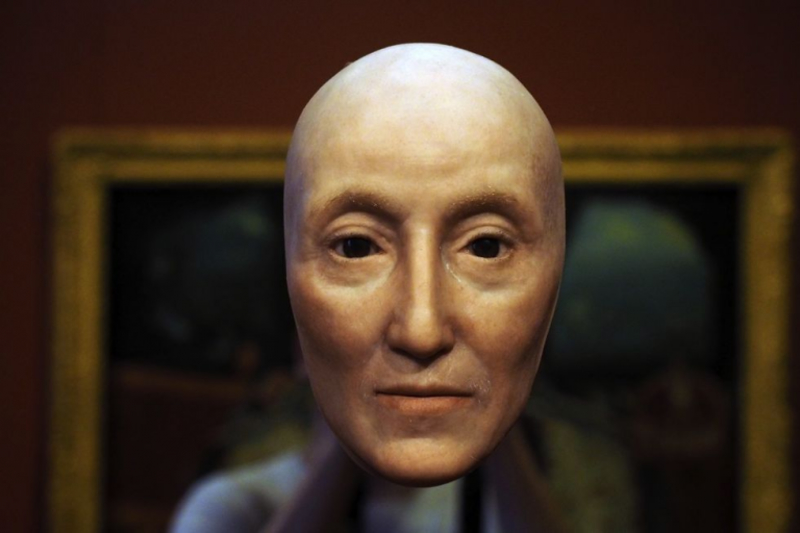 Smithsonian Magazine
Being able to bring those famous faces to life, and into the twenty-first century, is a credit to these expert teams, along with the help of a number of historians! So it looks like CGI, CT scans and 3-D printing have been able to give us all a glimpse into the past. Be prepared there are some good, some bad, and some that well… you might just want to cover your kids’ eyes.  Time to take off that plaster mask and uncover some of history’s biggest mysteries!

The man who put the Globe theatre on the map and really, lifted the English language and was responsible for its development, Shakespeare stunningly was the son of an English farmer! A man with a way with words unlike any other, his legacy is astounding. But as for creating his likeness with modern technology, it was decided to use Shakespeare’s death mask to create the image of what he really looked like! 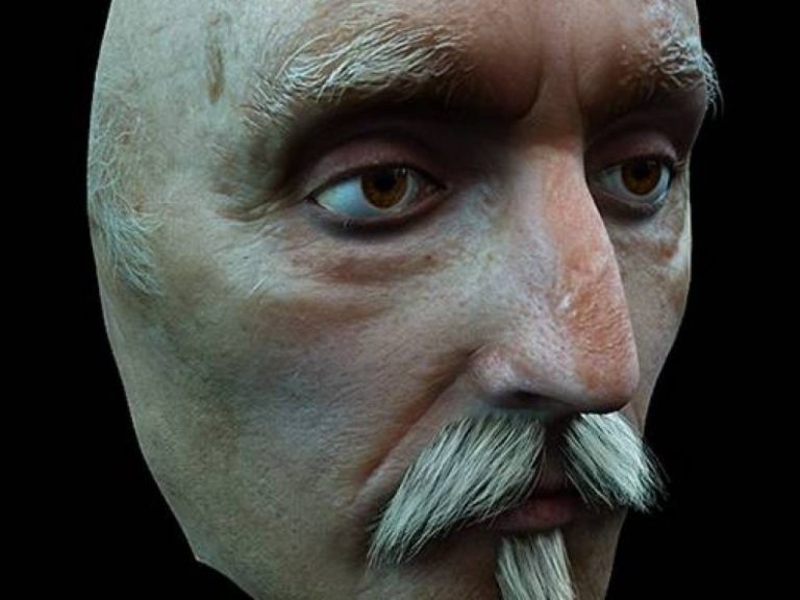 Dr. Caroline Wilkinson from Dundee University, used modern technology to scan the interior of his death mask to help create the 3D image of Shakespeare at his death in 1616. Therefore, the image above is of an older Shakespeare – we’re slightly irked at how real it looks, down to the last wart on his aquiline nose.

The marble bust of Cleopatra, created between 40 and 30 B.C. is believed to be the most accurate representation of the fabled woman. Cross-examining artwork with the bust reveals the same hairstyle and similar features, however, this could be just an example of how women were depicted during the time. She sported the “melon hairstyle” which was typical of Ptolemaic queens – as shown on coins and artworks which were dedicated to Cleopatra herself. 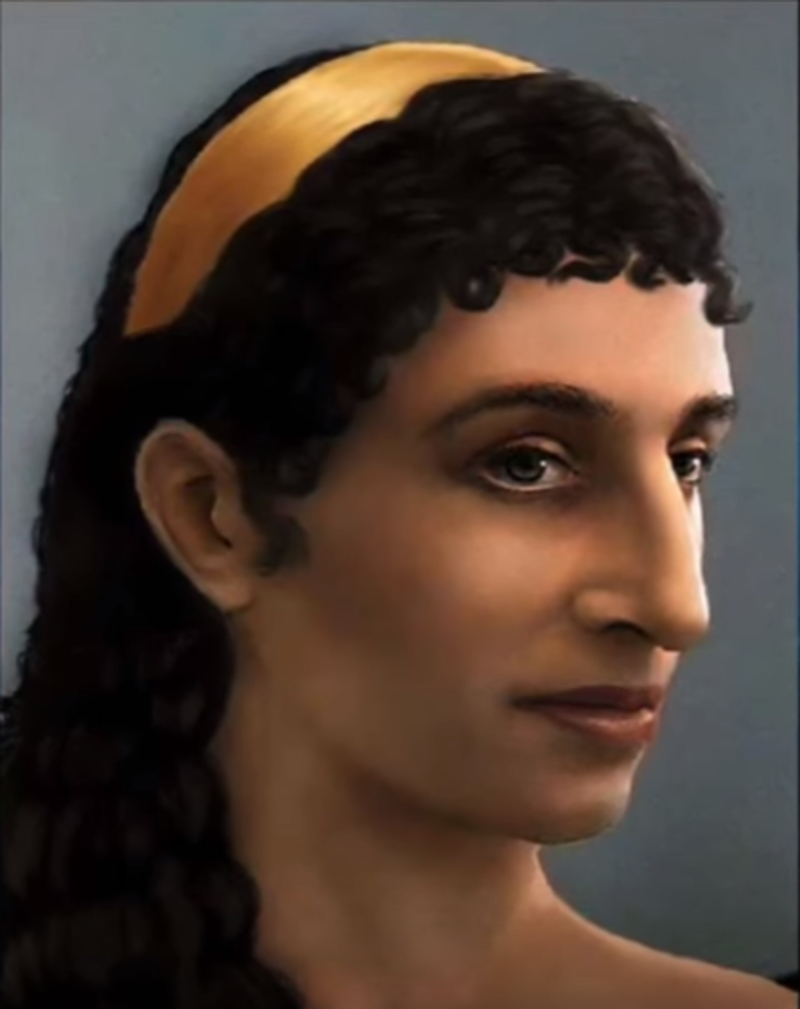 M.A. Ludwig created his version of Cleopatra too as we can see here, and she is imagined as having a strong nose with almost masculine-looking features. It sure is telling, as it highlights the fact that she must have been quite the intelligent seductress, using her cunning to charm Rome’s greatest men. It just goes to show that beauty isn’t necessarily the only way to charm people in life – and it’s no new phenomenon because well, Cleopatra lived thousands of years ago! What a woman she must’ve been!

Whilst Pompey may have indeed been aligned with the powerful Senate, Caesar managed to control the Roman empire singlehandedly, following the victory at the Battle of Pharsalus in 48 B.C. Caesar, despite being in a weak position with only 22,000 men and startlingly low provisions, he managed to earn a victory. It seems that Pompey was spurred on by senators, but played his hand too quickly, which led to their defeat. The ashamed Pompey fled the camp, disguised as a regular citizen. As for the ending of the battle for the Mediterranean, well, any history buffs will know it ended with a salacious affair with Cleopatra and then death by stabbing on Ides of March some years later. Talk about a Roman tragedy. 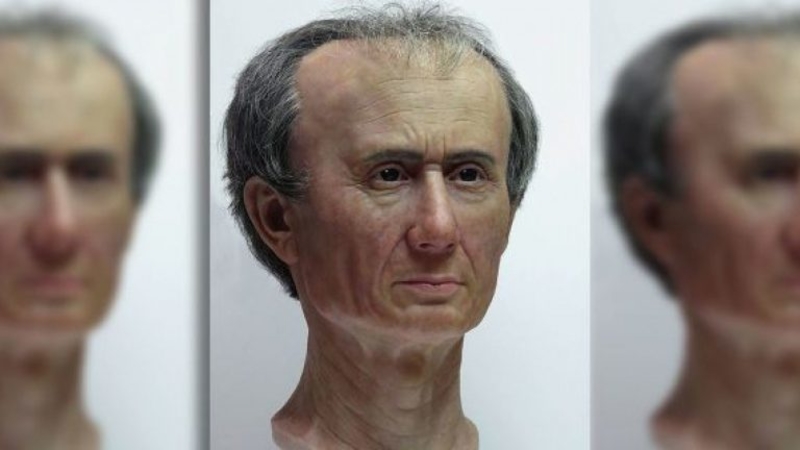 The bust of Julius Caesar which is housed in the Rijksmuseum van Oudheden in Amsterdam in the Netherlands was used conjointly with another bust to create the image you see above, which reveals the face of this great Roman Emperor. With a large head and forehead, his face seems almost disproportionate! Anyone who’s interested in seeing it up close? Well, you can pop over to the Dutch National Museum of Antiquities for your selfie.

Hidden inside the stucco surface which had been decoratively painted with Nefertiti’s likeness, was a gem – perhaps it was for the queen to take into the afterlife for payment of some sort! But if it were us discovering that bust, we’d leave it alone – haven’t any of these archaeologist’s seen “The Mummy”? Sheesh! Sculpted by the talented Thutmose, there was yet another hidden layer – a separate bust of Nefertiti underneath the stucco exterior, except this was more special, being made of limestone. Following a series of CT scans and digital manipulations, the face of the renowned queen was unveiled. 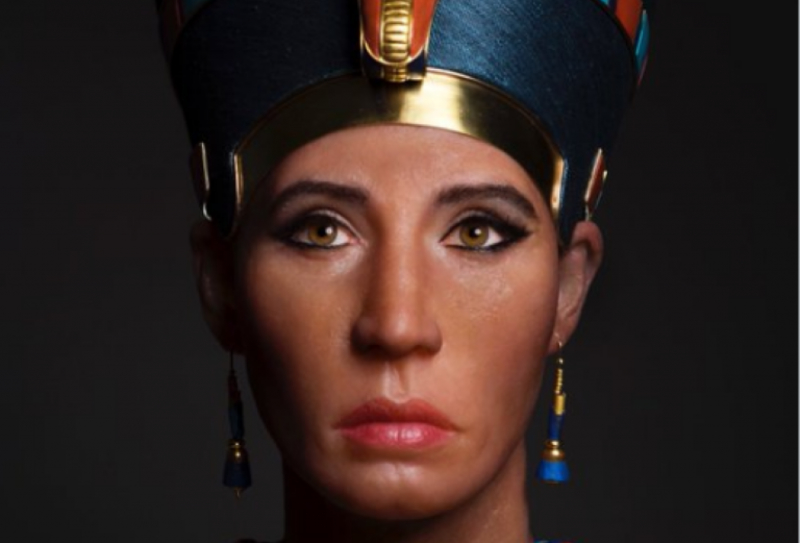 She was still just as beautiful as she had been painted and described, just with a couple more wrinkles and a slight bump in her strong Egyptian nose. But there was more to this amazing woman she mothered six children, with one of these going on to become the mother of King Tutankhamun. But we’re pretty disturbed at the ugly truth – King Tutankhamun’s father is none other than Akhenaten, Nefertiti’s HUSBAND! So yes, that would mean Akhenaten impregnated his own daughter. Okay, that’s just not on at all. But this knowledge is extremely telling – it explains the reasons for the deformities that hampered the young king-to-be.

Now Bach, sadly, was buried in an unmarked grave when he passed away, which meant his remains were almost nearly lost to the annals of history. Dr. Caroline Wilkinson of Dundee University (the woman who is famously responsible for “resurrecting” playwright Shakespeare), made it her mission to also bring Bach back…to the future. Using a cast of what is believed to be Bach’s skull, researchers and historians went to work. 150 years after his burial, the church where Bach was supposedly buried, was desperately in need of repair. 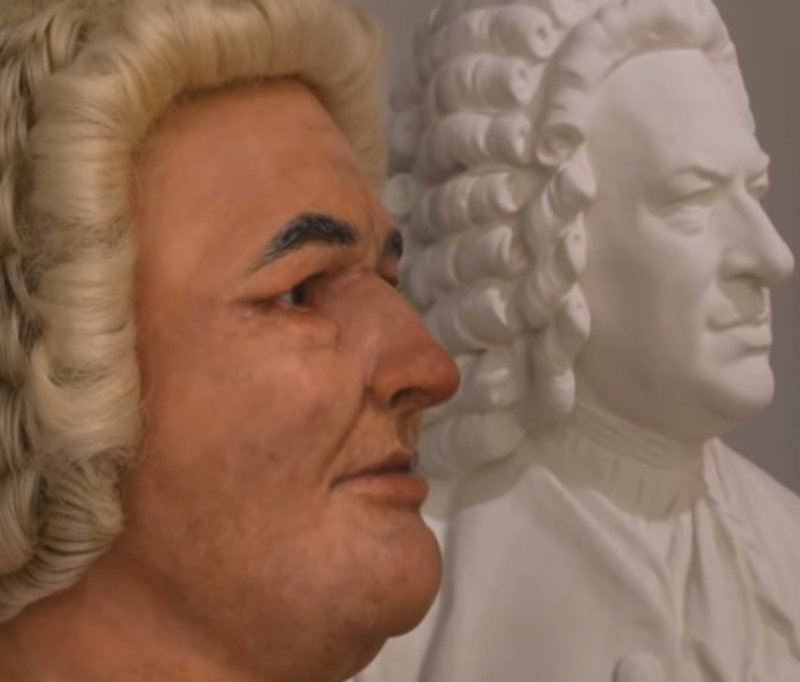 Theologians and music historians quickly thought to try and find Bach amidst the renovations and exhumed a number of graves. One of which, they believed to contain the body of the famed composer. The remains found in the grave, which included a skull, were loaned to Dr. Wilkinson to recreate the face as you see it in the above image! Now that’s slightly creepy but, there is a certain… harmony in it all! He may not have an angel face, but he sure produced some heavenly music!

We can now get an idea of what a young woman from the bronze-age looked like. A group of archaeologists successfully unearthed a teenager in Achavanich in Caithness in 1987. The young woman who is believed to have died around 4,250 years ago in Scotland might have been a member of the Bronze Age ‘beaker community’. Given the nickname ‘Ava’, the young woman was supposedly between 18 and 22 years old at the time of their death. 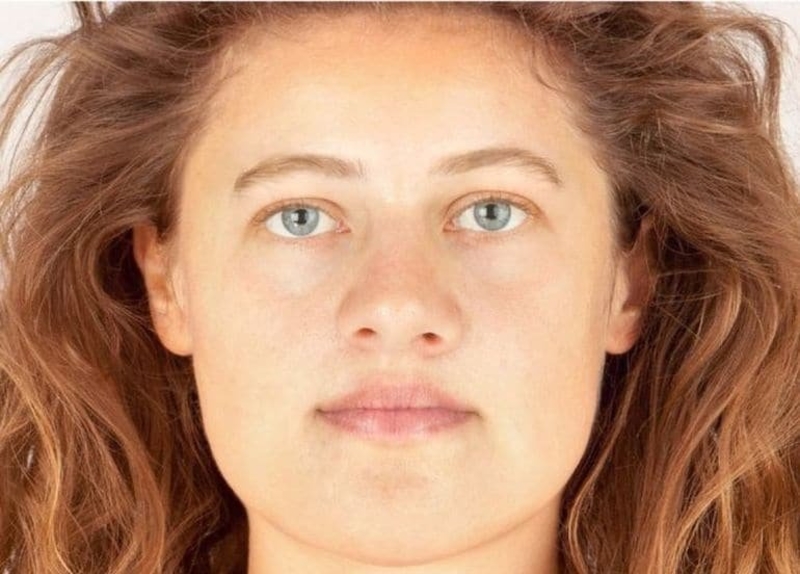 Her skeletal remains are said to be from around 3,700 years ago. According to lead researcher, Ms Hoole, it was especially exciting when they discovered the possibility of her being part of a wave of northern European migrants are believed to have settled in that area. Hoole went on to comment, saying that “since her discovery, there have been no, or very few, genetic connections with the local Neolithic population who resided in Caithness before her”.

The Face of a Founding Father

There’s nothing quite like stepping down at the height of your popularity eh? Unlike many who are booted that hang their heads in shame, Washington took his leave when people were begging him to stay on! He would’ve easily won a third term in the Oval Office, but decided to hang up his boots early. In doing so, he set a precedent of a two-term limit in office, which prevented the U.S. from being too easily controlled. 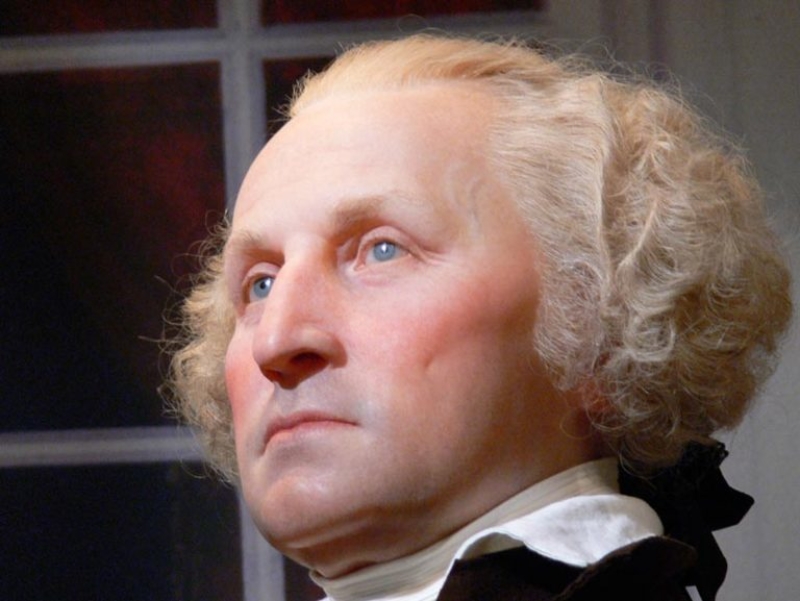 The image you see here was created by a team of researchers from New Jersey Medical School in Newark, purportedly revealing the true likeness of the Founding Father’s face! It really is quite amazing to see just what this team has come up with – the detail is incredible! From his fair skin to the fine stubble on his face, not to mention the piercing blue eyes, this team makes him look well, really real.

It seems that England merely needed a woman’s touch to settle differences that plagued the country. Whilst Queen Elizabeth may have been excommunicated by the Catholic Church in 1570, she managed to settle rifts that had long preceded her! She was triumphant in her reign, defeating the Spanish Armada in 1588, and kept a watchful eye over the arts and literature. If you’ve seen Shakespeare in Love, you’ll see the short cameo at the end with Dame Judi Dench appearing as Queen Elizabeth I, attending a performance of Romeo + Juliet.

3D printing, hand-in-hand with CT scans, allowed Collishaw to create an animatronic version of Her Majesty’s face, which even blinks! Kinda creepy if you ask us, and it almost looks like she’s…well, thinking? Yeah, we’ll pass! Collishaw shared that the inspiration for her facial features was drawn from the Armada portrait at the Queen’s house in Greenwich, London!