It’s easy for us to assume that cooking competitions are a fairly recent development, but apparently, that’s not true at all. In fact, culinary contests have been around for a while. In the 9th century Baghdad, for instance, being a foodie was a necessary quality if you wanted to get ahead in life. Obsession with food seemed fairly common among the city’s elite citizens. In fact, there are numerous accounts of the rulers’ ardent interest in cooking, eating, and having conversations about good food. They even held cooking contests among themselves, and one of the cook-offs did not end well for one of the contestants (exile and near-execution).

Nawal Nasrallah, an Iraqi food historian, and scholar said that during this time Baghdad was regarded as the “navel of nations” (the center of the world). Because its citizens had contacts with other parts of the world, this meant that there was a constant influx of food ingredients from other countries (e.g., spices, sugar, citrus). At the time, the city was basking in the glow of the Islamic golden age; its rich citizens had the wealth to enjoy an indulgent lifestyle, and because Islam did not forbid the enjoyment of food, they were ready to appreciate good food. “So the whole atmosphere was conducive to creating this kind of activity,” Nasrallah added. 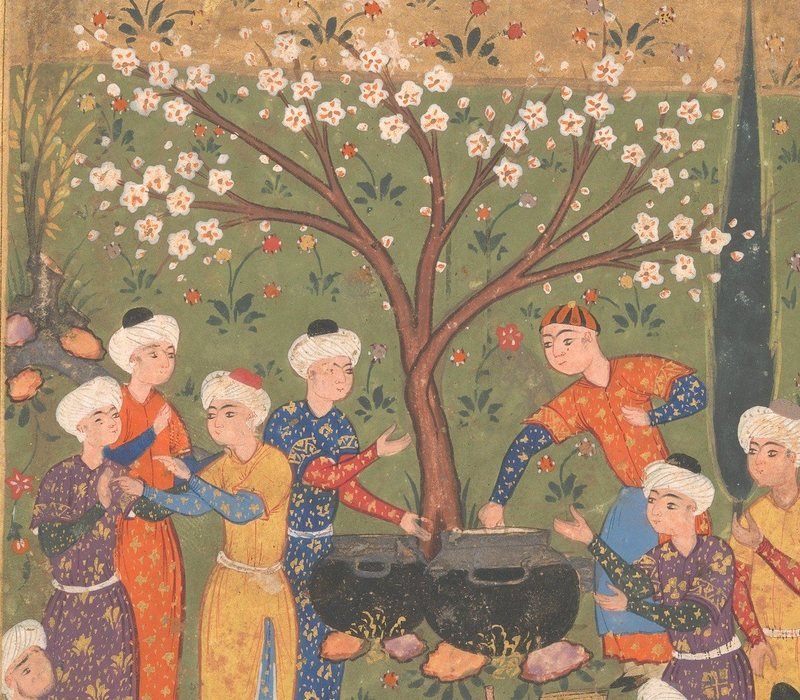 Food obsession was fairly common among the city’s rulers. One of the most popular dishes was Judhaba, which vendors would usually sell in the marketplace. One recipe (made with bananas, rose water, and sugar) was attributed to Ibrāhīm bin al-Mahdī, who Nasrallah describes as “the Abbasid gourmet prince” (the Abbasids were the ruling dynasty at the time). The caliphs would sometimes visit the marketplace, and some were even known to seize particularly scrumptious dishes prepared by commoners.

It’s probable that the caliphs have held cook-offs among themselves. According to one account, the caliph al-Maʾmūn, who ruled the city in the early ninth century, once participated in a cooking contest with his brother and boon companions. Nasrallah laughingly describes that episode as “Iron Chef of Medieval times.” One of the competitors was Ibāda, a good cook whose irreverent sense of humor almost cost him his life; he was eventually exiled. (This was hardly surprising, considering that the person he pulled the prank on became the caliph later. Another caliph brought him back to Baghdad, but after he pulled another prank he was banished again.)

Although Nasrallah observed that there are only a handful of similar tales, the fact that these accounts were recorded by scribes into chronicles that are usually reserved for battles and successions indicates that they were regarded as a significant social activity. Poets produced intricate food poems, and manuals with descriptions of how one can be an ideal “boon companion” for a ruler underscores how highly these people thought of cooking. One manual advised for these men to learn a collection of at least 10 exotic dishes. It was this food-oriented culture that led to the production of the first Medieval recipe books, which featured the favorite dishes of the ruling class. In fact, Nashrallah has already translated the earliest one produced, a cookbook titled Annals of the Caliphs’ Kitchen, which was written around the 10th century.

Did Ancient Greek Suits of Armor Really Have Six-Packs?
Is that six-pack historically accurate or is it just some Hollywood fantasy we got used to?

Facts You Never Knew About Leonardo da Vinci
Leonardo da Vinci needs no introduction. Everybody knows him as the man artist behind the Mona Lisa, but not many people know about the other aspects of his fascinating life..

What Do You Really Know About King Leonidas and His 300 Spartan Warriors?
You've seen him portrayed by Gerard Butler in the epic film "300", but have you ever given much thought to the real character of Leonidas, King of Sparta? A large part of what..