The Secrets of the Oldest Gym in the World

May 11, 2022 | Ofek Hagag
Share on Facebook
Imagine walking down the street at night and hearing the muffled sound of drums and roars. As you follow the sounds, they grow louder, until you reach an unmarked door set in a wall of a house on an empty alley. As eery as it may sound, we aren’t here to tell horror stories. The place we are talking about is actually the oldest gym in the world. Located by the Grand Bazaar in Tehran, the place is known by the locals as zurkhaneh and we’re here to let you glimpse inside.

This ritual is centuries old and has a clear structure. At 6 PM, after the men finish their workday, they gather at the zurkhaneh. Just like when entering a mosque, they take their shoes off and wash their hands. Then they have tea and chat together. Yes, just like a tea party, the gym is a safe space where they can talk about anything, from politics to soccer. That all comes to a halt when the guide (or Morshed, as the athletes call him) starts the practice. He begins by banging on a ritual drum called a Zarb. To the rhythm of that drum, the men walk into the arena and start moving together.

Next, the athletes start lifting. They have various kinds of weights, about 20kg each, meant to be lifted in a different way — heavy wooden clubs, metal shields, and a traditional metal bow called a Kabbadeh. The weights practice includes juggling and Sufi whirling, all aimed to create a strong, humble, sportsman-like athlete.

Unlike most gyms, which rely on membership fees for regular operation, the zurkhaneh relies on public financial donations. And while the men aren’t required to pay, they do need to help the community in return. 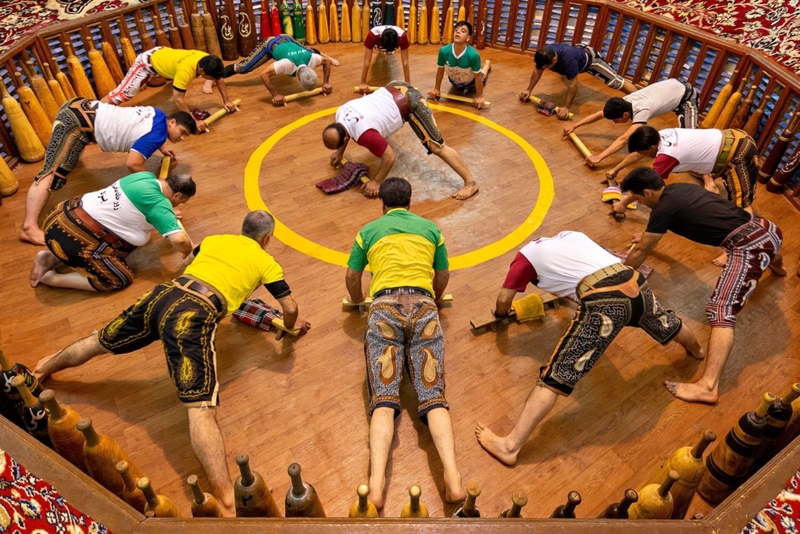 There is an apparent spiritual component to it all. The athletes are all practicing Muslims and pray to Allah and Mohammad throughout the session. The prayers are individual as they are collective. There is more to it than just theatrics or body glorification. These practices are so ancient they probably predate Islam, and so ingrained in the local heritage that the men later teach it to their sons. No matter what background or social status they come from, all the differences that set the athletes apart are wiped out and they turn into fighters, players, musicians, and entertainers.